Laura was featured on the podcast, Journalism Land, in which she discussed her article, The New Berliners, that was published in the Spring 2017 issue of the Virginia Quarterly Review

Don’t Be Afraid of the Bullets was named in PRI’s The World list of favorite books from 2014!

When the mail comes in each day at The World, it always brings a pile of new books. Sometimes there’s even a feeding frenzy as producers vie for various hot new titles. Rest assured, we love to read. And with all that reading, some books definitely surfaced to the top of our recommendation list. Here are our favorite books from 2014.

Esquire Middle East reviewed Don’t Be Afraid of the Bullets, calling it a “a timely reminder that [Yemen] should be in the news.”

It was into this maelstrom that Laura Kasinof landed in late 2009. Seeking to improve the Arabic she’d learned in college, and intent on becoming a foreign correspondent, the 23-year-old journalist hunkered down in the peaceful, friendly capital of Sana’a. Her days soon fell into an agreeable pattern of language lessons in the morning, and afternoons exploring the historic Old City, chewing qat with the locals and hearing their life stories.

Laura spoke with PRI’s The World host Marco Werman about her new book and Yemen.

“I studied Arabic, maybe I did some interviews, then I had lunch with friends in sort of a hole-in-the-wall restaurant,” she remembers. “We ate this meat stew called fahsa that’s absolutely delicious, and then we went and chewed qat every day, the narcotic that is just used in Yemen by nearly the entire population nearly every day.”

But on that day in March, Kasinof, a freelance reporter who was just 25 at the time, ended up in the middle of a brutal crackdown on protesters in Change Square, a plaza at the heart of Yemen’s capital, Sana’a. She recently finished a book, called “Don’t Be Afraid of the Bullets,” which begins with an account of that day. You can read the first chapter at the end of this story.

It turned out to be a turning point her life: “It’s something that sticks with you and causes anger inside of you, to witness something like that for the first time.” 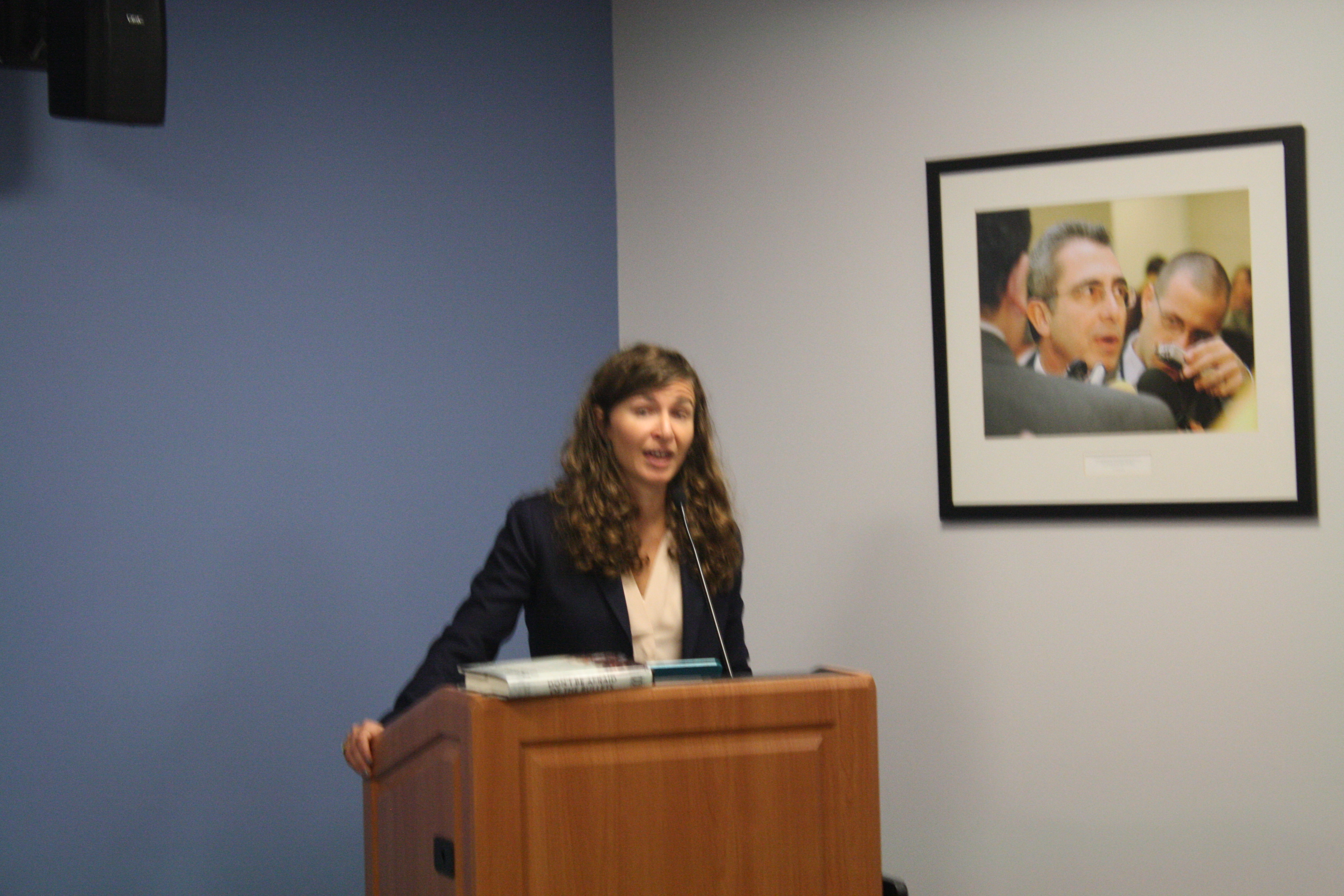 Yemeni-American activist, Rooj al-Wazir, and Laura talking about the latest developments in Yemen at Red Emma’s Bookstore Coffeehouse in Baltimore

An interview with Laura in the Frederick News-Post:

I studied Arabic in college. It was sort of a post-9/11 environment in which Arabic was a language in high demand. … After college I moved to Egypt to work as a teacher … and to work on my Arabic as well. In that experience I ended up stumbling into journalism and working for a magazine instead of as a teacher, and then I started to freelance for a list of publications. Fast forward a couple of years, a friend of mine recommended to me going to Yemen would be a good idea as a freelance journalist because there were no other journalists there and it was such an exciting, fun, lovely country to live in. I know a few people who had studied Arabic in Yemen and they all just loved it.

Cicero Magazine spoke with Laura about Yemen, conflict and her new book.

Q: So after spending years in Yemen, are you afraid of bullets?
A: There were times when I was around so many Yemenis who are not afraid of gunfire the littlest bit and that bled over to me….

There is no gallery selected or the gallery was deleted.